Both experience and training united the participants in their abilities to conquer the ice cap. All of the members had extensive backgrounds in outdoor activities including mountaineering, backpacking, winter camping, and skiing. To further develop these skills, the team members also trained both individually and as a group. All members were expected to run eight miles per day to condition themselves and simultaneously gain weight in order to prepare for the inevitable weight loss that would occur during the expedition. Group training included skiing across Minnesota to determine how many miles they could travel each day. For this trip, the expedition team was joined by 38 Cobbers and coined the “Ski Minnesota Epic.” The expedition team also traveled to Mille Lacs Lake to train for wind and sail functionality. For each pair of skiers, a pulk (sled) carrying 200 pounds of gear would be pulled with accompanying sails to ease the weight. The final group training exercise was a trip to Yellowstone to prepare for terrain and camping conditions.

Originally, the expedition was slated to commence on June 15th, 1980, but weather conditions caused delays. Fog prevented the team from flying from Iceland to Greenland and then the Johan Peterson Fjord, from which the team would make its 9,000 foot ascent to the ice cap, was frozen shut. To solve these debacles, the group changed its starting location to the Jorgen Peterson Fjord. On June 18th the ascent to the ice cap began, and the team started skiing on June 22nd. The skiers made their descent from the ice cap on July 25th, 1980 thus completing their 440-mile journey. 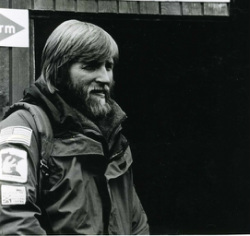 Paul Erickson, leader of the expedition and former Director of Student Activities at Concordia, credits the success of the journey to the effort of the team members. Erickson stated, “The one thing we found out is that our greatest asset was that we came from Minnesota where we had a set of values that made us believe in each other.”  The cohesiveness of the team made a significant difference at the end of the voyage as they scaled crevasses and crossed icy rivers--undoubtedly the most challenging segment of the expedition.