WHO IS THIS HANS??

Hans Nielsen Hauge was not a Concordia student or a faculty member. In fact, he never even set foot in the United States. Therefore, it at first might not be obvious why Hauge is considered an important figure at Concordia. However, upon examining Hauge’s life, it becomes clear that his life’s work serves as a subtle influence upon Concordia’s mission. 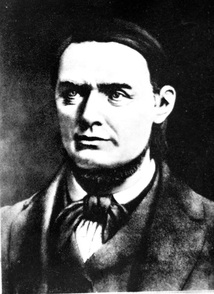 Hans Nielson Hauge
Hans Nielsen Hauge was born in Norway in 1771 and lived on a farm until his mid-twenties, when he experienced a spiritual awakening and committed himself to God. Hauge was a lay preacher, which means that he spread the word of God but was not officially ordained by a church. The fact that he was not ordained was actually a big problem in Norway during his lifetime. The Conventicle Act of 1741 stipulated that “only a state-sanctioned priest could conduct worship and administer the sacraments.” Therefore, Hauge was breaking the law by traveling around the country delivering his message. Both religious and civil authorities saw Hauge’s preaching as a direct threat to them. As a result, he was imprisoned multiple times, with the longest stint being five years from 1806-1811. These frequent trips to prison resulted in poor health and an early death in 1824. However, Hauge was able to exert enormous influence despite all of the obstacles he encountered. 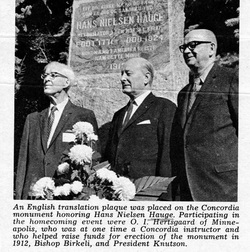 Article published in the Concordian that describes the new English plaque that was placed onto the Hauge monument.
Along with being a lay preacher, Hauge was a businessman. During Concordia’s commemoration for the bicentennial of Hauge’s birth, Dr. Joseph Knutson, then president of the college, referenced his business life saying Hauge “shared his business skills with people and helped them raise their standard of living.” For example, Hauge saw the value of the printing press and set to work writing and editing his works. He also invested in a paper mill which employed many people. Overall, it is said that Hauge established roughly 30 different businesses during his lifetime.

Hauge’s influence reached the United States when many Norwegians immigrated to the country. As a result, some of Concordia’s founders were inspired by his teachings and beliefs. These philosophies have since become an inherent part of the college.A few of Hauge’s philosophies and ideologies are reflected at Concordia to this day. For example, he stressed the importance of people using their talents and skills to help shape others’ lives. This is very similar to part of Concordia’s mission statement, which says to “influence the affairs of the world.” Cobbers are encouraged to use their education to better the lives of others and make an impact on society.  It also is reflected in the concept of BREW (Becoming Responsibly Engaged in the World). Additionally, Hauge’s combination of his faith and business life is something that the college stressed in its earlier, formative years. 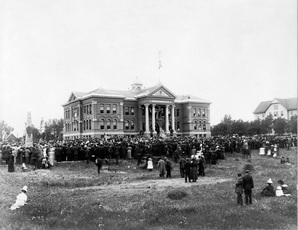 The dedication of the Hauge monument on June 10,1912.
Today, one can visit Concordia’s monument to Hans Nielsen Hauge outside of Old Main. In the early 1900s, a Norwegian exchange student named Peter Reite began to tell the campus about Hauge’s contributions to the Lutheran faith. Reite was very interested in the workings of the Lutheran Church and began to inform the Concordia community about Hauge and how his work had influenced a few of the college’s founders. Through Reite’s perseverance, funds were raised and the monument was dedicated on June 10th, 1912 before an estimated crowd of 15,000 people.