Since Concordia’s inception, the school had been termed a college; however, from 1891 to 1913 courses and programs were confined to two-years of study (a characteristic of academy programs). By the early 1910s, Concordia leaders recognized the need for developing a college program that would extend study to four years. In 1915, Concordia had developed a four-year course program, and on May 25, 1917, Concordia conferred its first bachelor of arts degrees to six graduates: Martha Brennun, Emil Bagley, Ingvald Lavik, Rudolph Lavik, Nils Mykkeltvedt, and Lars Sierstad. Diplomas were also awarded to those who completed the Classical, Commercial, Parochial, Normal, Shorthand, and Music Courses. In 1927, the last diplomas were awarded to academy graduates. 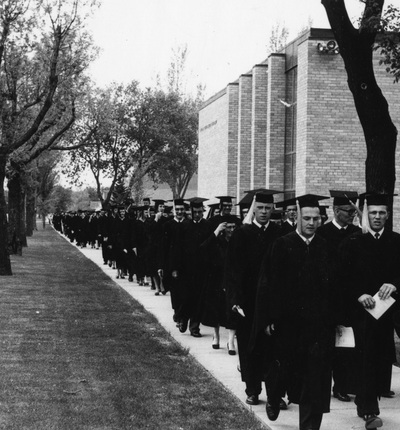 Students in cap and gown walking past the library, 1959. 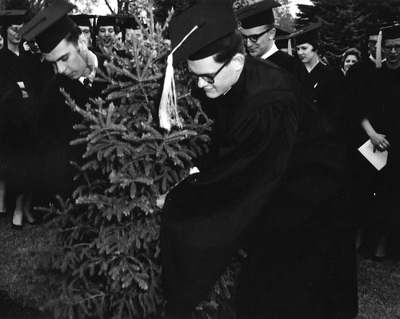 Students Weber, Bjornson, and Olson during the 1959 tree planting ceremony. 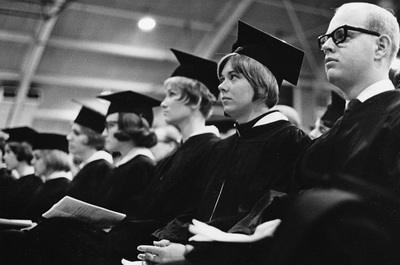 A row of graduates listening during the 1965 commencement ceremony.
By 1900, commencement evolved into a week of festivities. “Class night” featured student recitals and recitations and later evolved into Cap and Gown Day. Cap and Gown Day became a graduation tradition with the class of 1921. The event opened with a tree planting ceremony and followed with students recessing into the auditorium to listen to the class oration. Graduates sang the class song and the student body president would announce the gift that the class pledged to the college. A “Key of Knowledge” was also passed down to the junior class. In later years, the valedictory and salutatory speeches were added. In 1962, the faculty voted to discontinue Cap and Gown Day and cease selecting a senior class valedictorian and salutatorian citing time constraints and the tradition’s decreased importance. 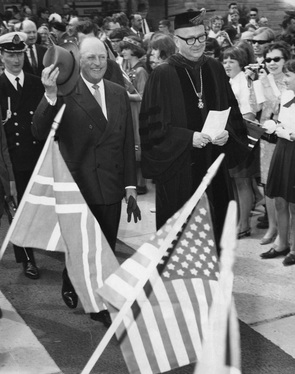 
While commencement has evolved, the event still remains an important commemoration of sending into society thoughtful and informed men and women dedicated to the Christian life.