This spring marks 25 years of Cornstock, the annual event that “was derived from the 1969 Woodstock gathering and centers around peace and music” according to a March 1991 Concordian article. Lisa Fuglie is credited for the idea of Cornstock which was first held in April 1989. The first Cornstock was co-sponsored by the Campus Entertainment Commission and the Inter-Hall Council, and each dormitory supplied funds so students would not have to pay to attend the event.

For over a decade Cornstock was held on Olin Hill and featured mainly local artists. In its early years the event was a day-long affair lasting from around noon until the late afternoon or early evening. By 1991 the event had grown in popularity and saw record attendance of 1,200. Cornstock has also regularly sought to raise awareness or funding for a particular cause such as food drives, Earth Day, or breast cancer. In 1994, the event was shortened in length and brought in national and regional bands to help with attendance, which increased to 2,500 in 1996.

Throughout the 2000s and even into the 2010s, the event has continued to change in its makeup. Contests, games, and other additional forms of entertainment/activities have been added. The planning team has continued to please the student body with bringing in headliners along with more local bands. A consistent goal of the Campus Entertainment Commission is to find the best performers they can and remain on budget. The 25th annual Cornstock will take place on Saturday, April 26, 2014 and will feature Ben Rector and Hoodie Allen. 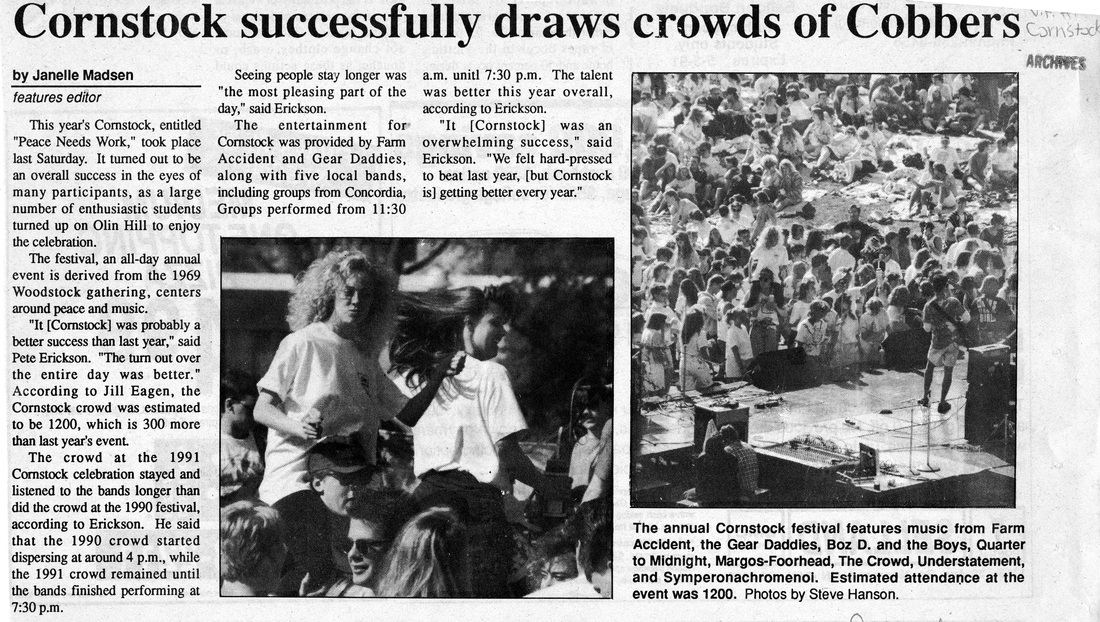 An article from The Concordian featuring the success of Cornstock 1991.